Indoorwall Getafe, has received the third and last stage of the Spanish Difficulty Climbing Cup 2022 on the 8th and 9th of October. As happened in the last two meetings, at Torrejón de Ardoz and Vilanova i la Geltrú, from the young categories were most of the participants. In all, 178 climbers have travelled to Getafe to compete in the last stage of the Cup 2022, the one that has decided the winners of difficulty in each category.

298 participants have competed this season in the Cup.  +8000 has been the official clothing sponsor of the competition, providing the competitor’s T-shirts. 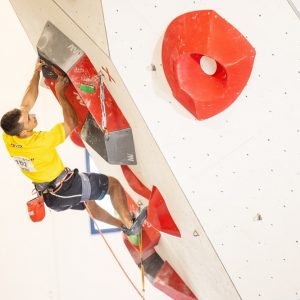 The equipment’s responsible Kimy de la Peña, Edu Marín, Diego Marsella, Lucas de Jesús and Alberto Rocasolana have prepared some tracks loved by the viewers and have forced the competitors to give their best. The men have climbed tracks where the minimum mistake could penalize them.
Javier Cano Blázquez has been the best in male category, Guillermo Peinado Franganillo was a bit worse than Javier, but he got the second position. Lluc Macia Llobet, finally got the third position. Regarding the female category, we enjoyed incredible climbs as it happened in the Spanish Difficulty Cup 2022. The three competitors in the podio were Rut Monsec with the victory, Antia Freitas the second place and the third one Aida Torres.

Rut Monsech & Javier Cano won the Spanish Difficulty Climbing Cup 2022. Rut arrived at the competition as one of the favourites and her know-how during the weekend confirmed her position in the general.
In the male category, Javier Cano, the climber from Extremadura, has been the best of the competition due to his security. 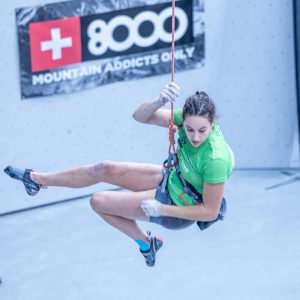 From +8000, we want to congratulate all the participants. Special mention to all our participants from the “Federación Extremeña de Montaña y Escalada”, with whom we collaborate by providing clothing material. We feel very proud of having a new member that has been the winner of the absolute category. We also want to congratulate Antía Freitas, who got the second place in the general classification. Congratulations!