After a couple of weeks of anticyclone installed in The Alps and forecasted to continue in the following days, Marcel and I received a text message. It was from our friend Georg; proposing us to do a crossing with the mountaineering skis and the paragliding. The plan was moving with the paragliding if the weather allowed us. This looks good! We are going to the Oberland massif in the Swiss Alps. Marcel and I couldn’t reject that proposal and bearing in mind that none of us did it before, encouraged us to join this wonderful adventure.

We took the cable car a bit late in the morning from Grindelwald 950m to Eigergletscher. From there, the train that would leave us in Jungfraujoch 3463m. From there did we begin with the mountaineering skis to Monchioch 3658m. A long descent on the Ewigschneeald glacier waited for us, although too plain, reaching approximately the height of 3200m above sea level. The sun and the heat embraced us in that day at the beginning of spring. We began the ascent with a relaxed rhythm due to the hot, the lack of air and the heavy bag we carried with all the mountain material (plus our paragliding and chair to fly) we had the impression that it was a bit long and we felt we were in a large white dessert made of snow and rock. Despite that, we were motivated due to the perfect conditions to take off and land where we had planned. 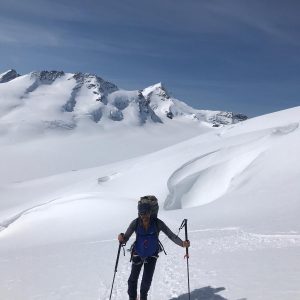 Glad to have reached col de Fieschersattel at 3923m, we didn’t have time to ascend the Grosses-Fiescherhorn at 4049m. So that we began to organize everything to take off from the large glacier plate that this 4000m mountain has in its foot. 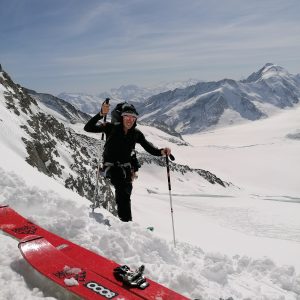 The time to take off has arrived; to fly and land in the unknown. The flight conditions were great. A light wind breeze, a large blue sky, and a good sensation of “everything is going to be okay”. The first who took off was Georg. At the moment of opening her paragliding and sliding, there was no way back. The second who took off was Marcel and finally me. You are alone in that moment, and you make the decision… an incomparable feeling invades you when you feel you are being transported in the air, flying over sharp peaks and enormous glaciers; the immensity of the environment that surrounds you. We were flying the three of us in direction to col de Finsteraarioch 3283m where we planned to land. We had a great landing on the glacier 100m of irregular terrain under the hill, with powder snow, the glacier with little slope and without cracks at sight. We packed the paragliding, and we placed the sealskins to go up the hill. In that silent and emotional moments, you notice how lucky you are and that you have discovered a wide range of opportunities to make new projects on the mountain. 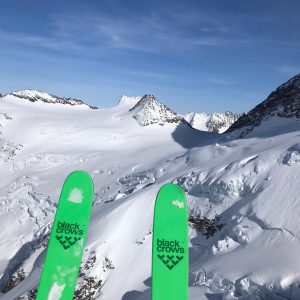 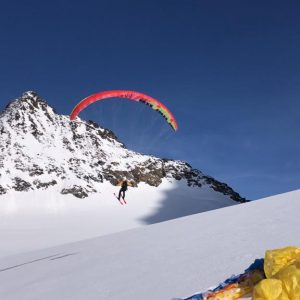 Our intention was to take off from the hill of Finisteraarioch, but the wind changed the direction and hit us on the back. So that we decided to descend with the skis through the Finsteraargletcher glacier at the bottom of the north face of Finsteraarhorn 4274m (this somber face is remarkably large). We had good snow when skiing and we didn’t find any track of other skiers in all that 500m of descent. In the junction with the Strahlgg-gletscher we just had to reach our hut Aarbiwak 2731m, where we arrive at the end of a fantastic day on the mountain. Surprisingly we were alone at Vivac hut. We had light and gas; in Swiss style (nothing can be missing!). Everything tasty, clean, and abundant. And although the guard isn’t there, paying is always a must. Well, I think we are going to sleep well after an intense day full of new emotions. 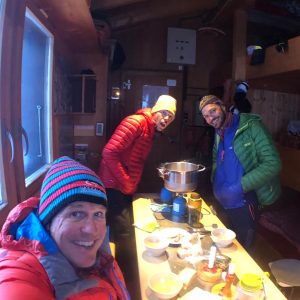 We wake up early. We prepare a succulent breakfast and go out into the dark of the night; those are two of the things I like the most on the mountain. You know you will get the reward when the shadows turn into lights and a new day is announced.

While we were sliding on the iced slopes of the Strahlgg-gletscher glacier, we were slowly climbing to our day’s goal, Lauteraarhorn 4042m. This time we left the paragliding in the hut because our plan was to descend through the face E, with its almost 1000 meters to ski on its steep slopes.

The snow was too hard packed despite we had blades on our skis. They didn’t work as well as they should and we decided to change by setting crampons, getting out an ice axe and carrying the skis in the bag. The conditions were perfect to climb this remote and coveted mountain of 4000m, so without facing the sun, we kept going. When the first sunrays arrived at the east face, we still didn’t arrive to the middle of our climb. We were continuously improving in the rest of the climb, climbing with a perfect weather and ideal conditions to descend through that vertiginous terrain of snow. 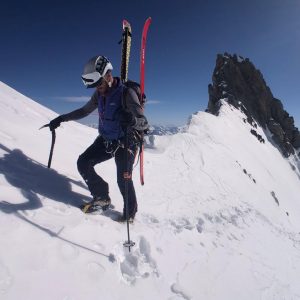 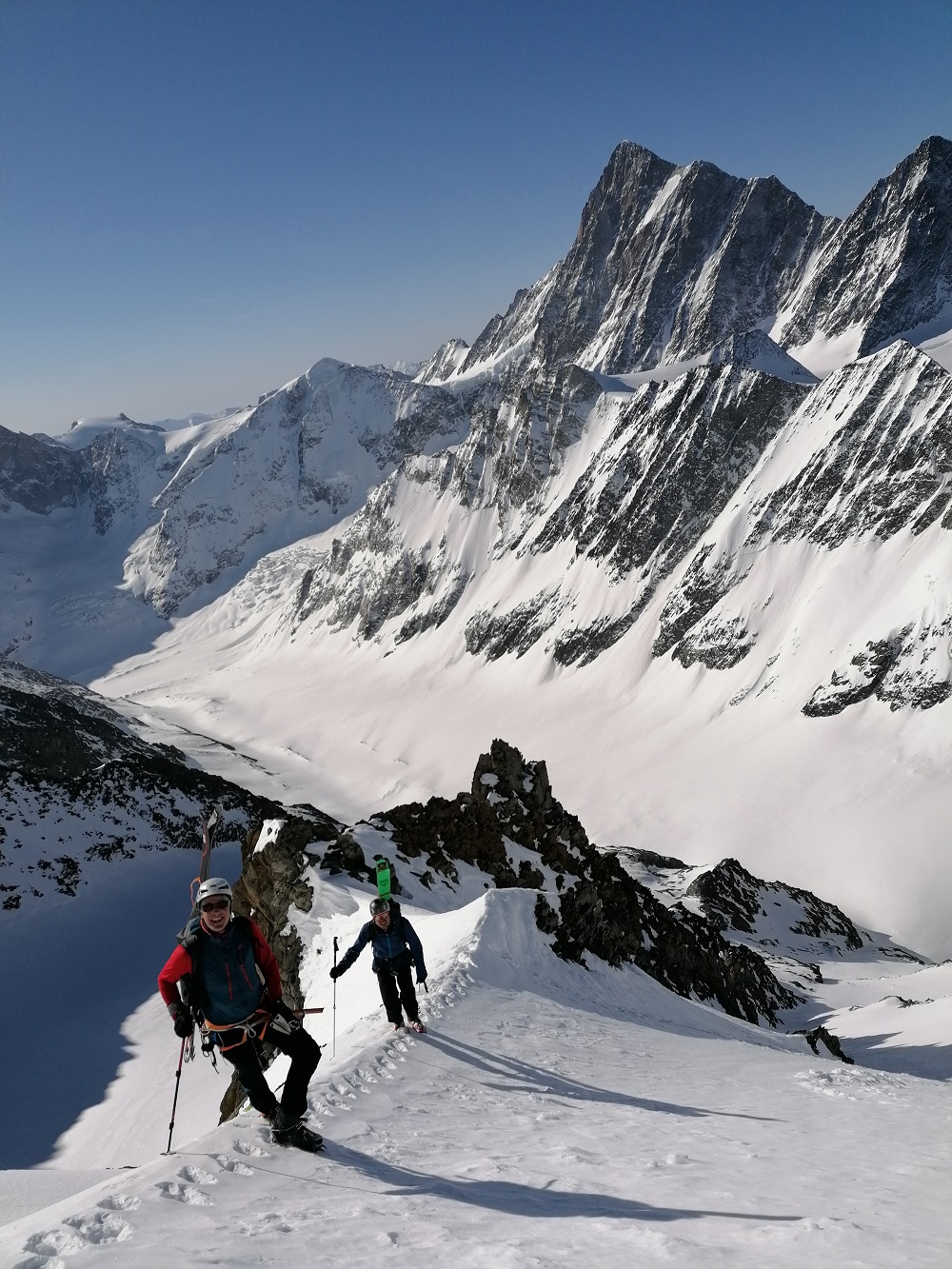 Arrived at this point (col 3882m) we left the skis, we put the crampons on to continue to the top through a short rocky edge and then we wore the skis again. We waited for a while to eat, to drink something, enjoy our environment and getting 100% ready for the descent. The weather was perfect, just a slight breeze of air did we receive. A great peace and privilege being immerse in those beautiful mountains.

The first turns facing the slope are difficult and decisive, so we went for it! Since the first moment everything flowed and the three of us did one of the best descents of our life, with good snow conditions, the skis worked right and there was excellent spring snow. Amazing! 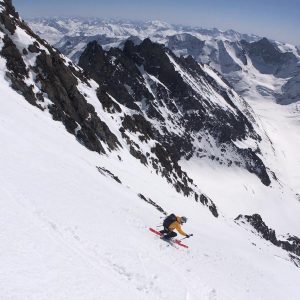 We were the three of us on the glacier, reunited, happy and relaxed for having achieved this descent, we just needed to enjoy the glacier a bit more. Then, we went up to our hut to rest and dry all the material. The rest of the day we dedicated it to eat, drink, rest and enjoy our palace.

So early in the morning we left the Aarbiwak hut 2731m. A brief descent took us to a height of 2400m above sea level, cross between the Finsteraargletscher and Lauteraargletscher. We did this quickly because the snow was hard packed. A long crossing through the Lauteraargletscher until the col 3124m. It took us time; the first sunrays of the days began hitting one hour before arriving to that hill. From there we had to do a slight descent through the Obere Grindelwaldgletscher and put sealskins back, a long but not steep crossing to the Rosenhorn 3689m was waiting for us. 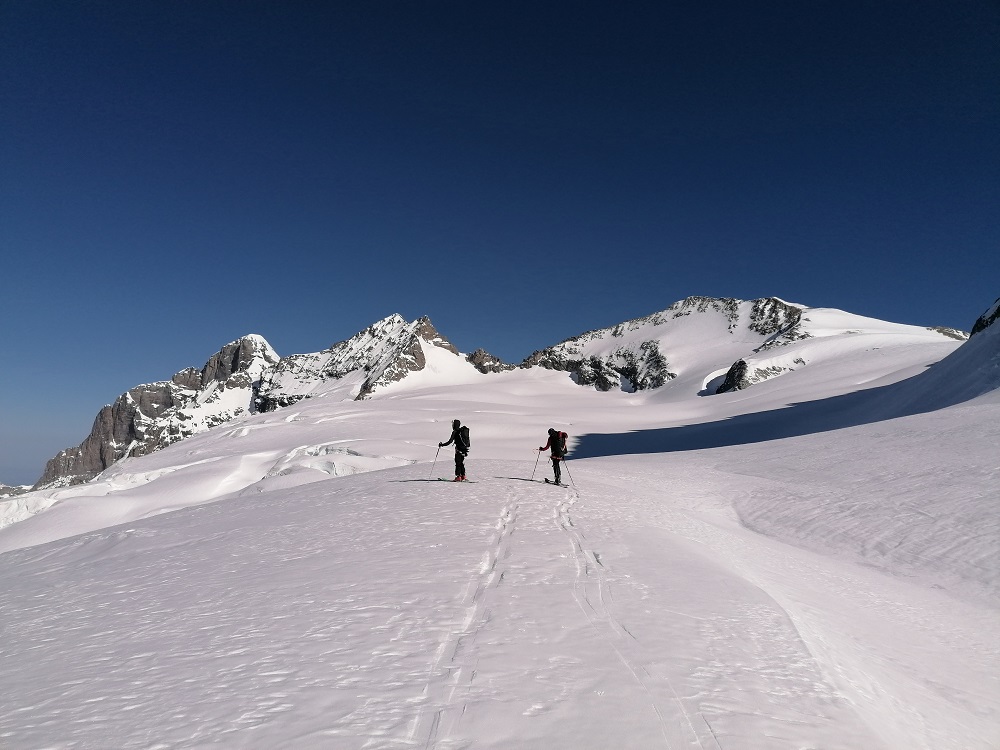 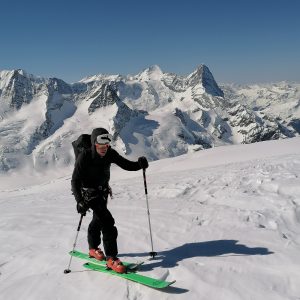 Some meters before reaching the top, each one organized his paragliding to take off. We needed to wait some minutes to get the best wind’s direction, and when everything was ready, I was the first one in taking off. Everything was perfect! Sliding with the skis, the sail is over your head, in the twinkling of an eye I was in the air. I turned left direction Watterhorn 3702m; this flight was amazing. It was on a very relaxed conditions and doing a wonderful route, going next to the peak and walls around Grindelwald 950m and having in front of our feet the Eiger and its big north face. I was losing height little by little; I didn’t want this journey to finish. The time of landing arrived, and it was at the ski slope the one on the background next to the parking where we left the car three days before the beginning of the adventure. 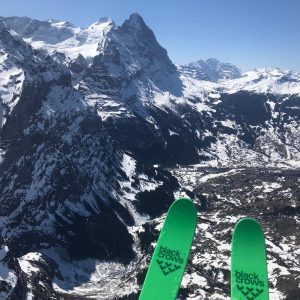 Marcel & Georg did the same as I did, and they landed at the same place. We did it! We are all safe, with a new and great experience for the three of us and being even more friends. That is the point of going out on the mountain!

Thanks to my friends Marcel & Georg for this special adventure and for equipping myself with incredible mountain clothes.