Aida Torres & Francesco Bosco, stand out in the second stage of the Spanish Difficulty Climbing Cup 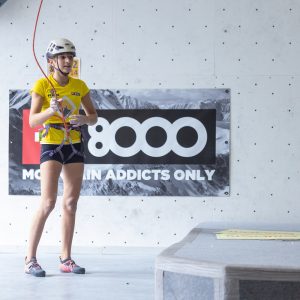 Indoorwall Vilanova i la Geltrú (Barcelona) has received the second stage of the Spanish Difficulty Climbing Cup – Fedme in junior and absolute categories, the days 17th and 18th of September. With this date the national competition circuit has started-up again, after summer.

The person in charge of the equipment of the second stage have been Felix Obradó, Gerard Rull and Edu Marín.

+8000 has been the official textile sponsor of the stage, providing the T-shirts of the competitors. 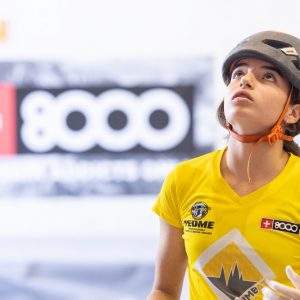 More than 170 junior climbers competing on the II stage of the Spanish Difficulty Climbing Cp.

The junior categories are still the ones which bring together more climbers to the cup. In the Vilanova i la Geltrú stage have been precisely 146, distributed among the categories U-14, U-16, U-18, and U-20, male and female. The proposed routes by the equipment’s responsible has caused that the young climbers must give their best in physical and technical lines. In the U-14 female category, the winner has been Milena Casetta after performing a quite complete weekend. In the junior male category, the best position on the podium has been for Bernat Munné.

The U-16 male and female have competed in a very equivalent finals and have offered a wonderful show. The male category winner has been Roc Verges and Geila Macià has dominated the U-16 female category and her knowledge has allowed her to win at Garraf climbing wall.

Regarding U-18 and U-20 categories, high level finals have been played. Ana Torregrosa y Joanes Esparta have been the winners of the U-18 category. In U-20 category, Dídac Zamora was the male winner and Oihane Ruiz the female one.

Aida Torres has been the best climber of the female category. The competitor has climbed with total confidence, what has allowed her to face the route with great security. The second classified has been Lucia Sempere, who stayed so close to the first position showing great potential. Lucia Miranda has competed until the end, and finally achieved the third position on the podium. Among men, Francesco Bosco, has been the best of the male absolute category showing a high level during the weekend and a great degree of concentration which has allowed him to reach the victory in this second stage at Indoorwall Vilanova i la Geltrú.

The climber Javi Cano has been second and the climber Guillermo Peinado has been third on the podium.

Next stop of the Spanish Difficulty Climbing Cup Getafe (Madrid)

Once the second stage in Vilanova i la Geltrú is over, the next scene for the national competitions will be Getafe, in a third and last stage of the Spanish Difficulty Climbing Cup 2022, that will bring back together the best climbers of Spain on the days 8th and 9th of October.

From +8000 we are pleased to congratulate all the winners for their great performances in this second stage of the Spanish Difficulty Climbing Cup. A special mention to our participants of the “Federación Extremeña de Montaña” with which we collaborate by also providing the textile. 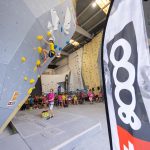 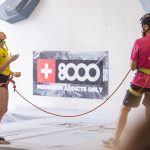